More than 100,000 visitors from 30 countries are expected over the course of the five-day event, which began Thursday, Nov. 3, with a primetime preview and will run through Monday, Nov. 7.

“It’s like the two greatest events you can have back to back,” he said. 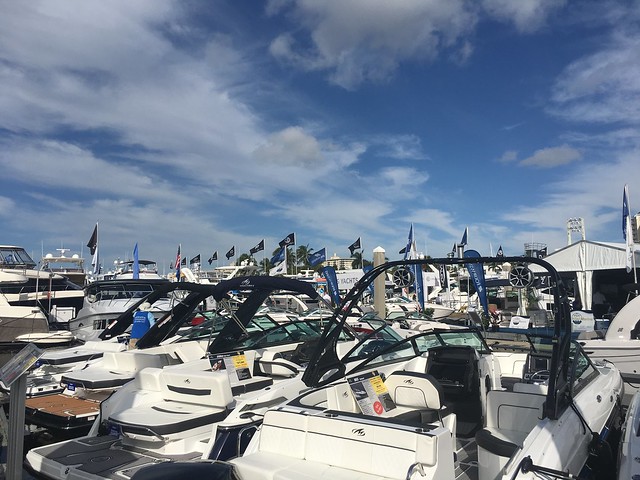 This year’s show boasts new features including a Superyachts Pavilion with a center for food and drinks, a sold-out VIP lounge at the Swimming Hall of Fame, air conditioning at the Sailfish Pavilion at the Convention Center, and a colorful entranceway at the Bahia Mar designed by a Lighthouse Point artist. Food options range from create-your-own salads at The Market Place to lobster rolls and fried shrimp at Off The Dock, plus concession stands from area restaurants.

Paraphrasing U.S. Olympic hockey team coach Herb Brooks, who once said “Great moments are born from great opportunities,” he stressed the importance of the region in the marine industry.

For MarineMax CEO Bill McGill, the Fort Lauderdale International Boat is not only a great opportunity, it’s one of the most important events of the year. He has over 150 team members on site ready to assist those who have already booked appointments.

“We have high expectations, and we believe it will be a victory as it has in the past and will continue to be," he said.

Tickets are $28 per person and $12 for children ages 6 through 15. For parking information and more, visit our Fort Lauderdale International Boat Show guide here.

Fort Lauderdale International Boat Show 2016: What To Do, Where To Park, And How To Buy Tickets

Travel To Morocco For Magic, Marketplaces And More
March 23, 2020

Pamper Yourself With An At-Home Spa Getaway
February 03, 2020